What's on your mind?

Yeah, nighttime Manhattan looks so cool!
Yeah, I like it for some other reason
Eh, it's alright.
I don't like it.

So, this is just a quick post, but I wanted to get your guys' thoughts on this. So when Season Two (Keener's legacy), came around, it was hinted that once we took down Hornet's cell, it would be the end of Keener's legacy, and his plans for world-wide anarchy would be finally ended. Then we could focus on the bigger threat at hand, the Black Tusk.

But I think the SHD might be overlooking something. I don't think Keener's legacy is quite over yet, and by ignoring the threat underneath our noses, we might be setting ourselves up for disaster.

One of the comms for Season Two showed Hornet speaking to an as of yet unidentified female rogue agent, discussing how Hornet was struggling to establish his leadership. It was hinted that this unknown agent had a team of her own, and we have no idea who she is or what she's planning, but if she's speaking to Hornet, it's clear she's also a loyal follower of Keener.

There was a focus on the Eclipse virus for Season Two, but we know that Keener sent a package with Eclipse to Jupiter's cell in Season One, which they destroyed. But who's to say he didn't send it to other cells, like the one Hornet was speaking to, as a sort of contingency plan if he failed to launch the missile onto Manhattan.

The fact that we have no idea who she or her team are, where they are, and that she might have Eclipse, is worrying enough. But the fact that she has yet to make herself known and is playing the long game tells me she's planning something big.

I don't know. I might be getting a little conspiratorial here. This could be nothing at all, and I'm reading into this too much. But as someone who's a big fan of Division lore, and enjoys searching every little detail and watching the comms and echoes for interesting things, something about this stuck out like a sore thumb, and my mind just starting putting the puzzle pieces together in my mind.

This went on for a bit longer than I planned, but I'd love to hear what you guys think if you made it this far. Am I thinking too much about this, and Keener's legacy is really dead? Or does Keener still have followers out there, organizing for something really bad, and we have no idea what it is?

Resistance
Incursions
West Side Piers
Underground
Survival
Something else

I mean, the two games are very similar in design and scope.

It honestly feels like Ubisoft, having scrapped R6 Patriots in favor of R6 Siege, decided to still pull some pieces together and bend other parts in order to start up a new Tom Clancy's franchise.

I mean, if you watch the trailers and gameplay of Patriots and see it compared to The Division... it kinda links up. 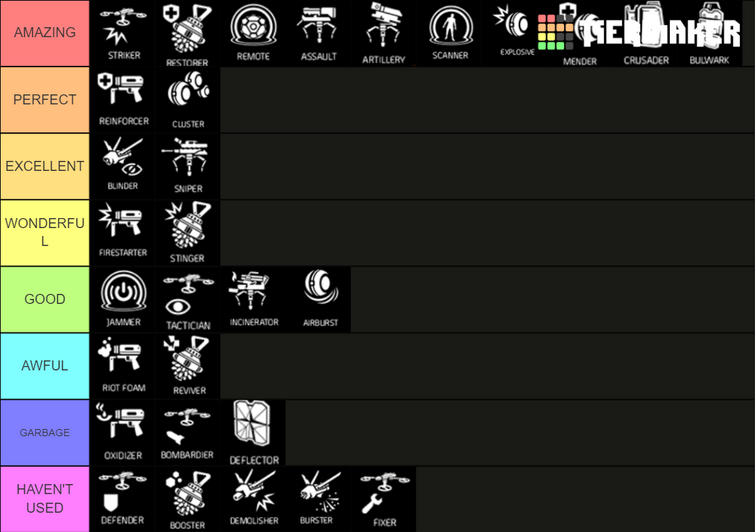 Hey, I know this is a lot to ask, but can someone put together a list of all named weapons and gear in the Division 2 and post it in the comments? It's not on the wiki, and I want to make sure I have them all, as I fancy myself a bit of a collector of all the weapons in the Division games.

One thing, this does not include exotics, just named weapons/gear. Anyways, thanks. I'd really appreciate it.

Do you ever just stop and think for a second like “Man how is a normal NPC’s daily life is like in the game and how to think this happened in 7/8 Months?” It’s just sounds so surreal that a year ago(ingame) life was all normal and now everything is now hell, You ever think that? Or is it just me.

Sometime this month
September
October
November-December
Probably not till next year
No guess.

So if any of you have played Viewpoint Museum mission, (which I assume is most of you since this game came out in 2018), you'd know that when you go through the front gate, if you take cover behind something, you can see some True Sons lined up, getting berated by an officer about guard duty.

Well, in story mode, since the enemy archetypes never change from the first time you played, it's always gonna be a Heavy Weapons guy. But unlike Jefferson Plaza, where something similar happens, no matter what difficulty you play on, it's always gonna be two Assaults, as least it has been every time I played, the classes will be shuffled for this scene, so you can have a Thrower or any other class here. But what's funny is these lines are recorded with a male voice actor, so you can have a female True Sons yelling at guys in a deep man voice haha.

I know it's a little detail and doesn't matter, but it makes me laugh whenever it happens, like when after Roosevelt island, after you destroy the boat, every remaining Outcast runs away, even suicide bombers and Tanks, and how if you kill a Hyena, sometimes they'll say "I never liked that guy anyways."

Sometimes the little details can be so funny.

Does it rotate back to season 1 because i would like season 1 rewards to come back.

So I just wanna know do people give their agent(s) a background/backstory? I don’t know if anybody does that but I’m curious if you do.

Strategic Homeland Division
I LOVE IT!
I really enjoyed it
It’s okay
It was bad
Ughh it’s terrible

So how will TDH fit in the universe? Yes I know it’s the next installment but I have story question like:

Okay, so I had a question that I'm confused on that I figured some of you more versed in the lore than I am might know the answer to.

So, Natalya Sokolova is supposed to be the leader of the Black Tusk and Schaeffer's boss, right? Well, looking back over the comms and echoes, Schaeffer was answering to a male figure only identified as 'Unknown', who we all assumed was his boss.

Natalya didn't really come into the picture until Season 3, and if I remember correctly, she wasn't even so much as mentioned. Maybe I'm wrong, but so far I can't find anything on her pre-Season 3. So who was this Unknown figure? Was he Natalya's second in command or something, and if so, why haven't we seen anything of him since? Did Natalya replace him as CEO since she founded the company, and she came back to lead? Did he die off-screen? Was there some retconning and Massive forgot they introduced this character?

Like I said, I figured someone who was more versed in the lore outside the games might know more than I do. It's just been bothering me and I couldn't figure it out.

Came across this PC Gamer article on the Division 2. It's a few months old, but it's an Interesting read, and gives you a little bit to think about. Recommend checking it out if you want.

Playing The Division 2 is the opposite of escapism right nowpcgamer

Help us grow The Division Wiki