Increase skill power by 10% when no skills are on cooldown

Increase damage by 5% when one skill is on cooldown

Increase armor by 10% when both skills are on cooldown

Barrett's Bulletproof Vest is an Exotic Body Armor gear piece. It drops from the named enemy Larae Barrett in the mission Lexington Event Center, as well as randomly from Field Proficiency Caches and Survival Caches. The body armor resembles a basic kevlar vest with a messy white "X" painted across the front.

The talent on Barrett's Bulletproof Vest has three components to it.

Note that the talent only refers to standard skills, not the Signature Skill. That said, the vest is a notably versatile piece of kit, as it plays to all three core stats - Firearms (damage), Stamina (health/armor), Electronics (skills) - instead of specializing in one or another. The skill power bonus encourages an agent to use one of their skills to take advantage of it, and doing so will immediately replace the skill power bonus with the damage bonus, encouraging them to use their weapons. If they need additional survivability, they can pop both their skills and get the armor bonus while both skills are down.

Managing one's skill usage is critical to getting the most value out of the vest, but no matter what an agent does, they will always be getting at least something from it. As such, Barrett's Bulletproof Vest is an attractive piece in any multipurpose or jack-of-all-trades build, including the hybrid High-End/Exotic ("hexo") build. 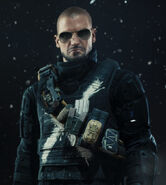 The vest as it appears in the character select screen 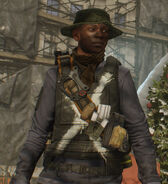 Daytime photo of Barrett's Bulletproof Vest
Add a photo to this gallery
Retrieved from "https://thedivision.fandom.com/wiki/Barrett%27s_Bulletproof_Vest?oldid=50781"
Community content is available under CC-BY-SA unless otherwise noted.