Start a Wiki
watch 01:41
Who are the Cleaners?
Do you like this video?

The Cleaners are former New York City sanitation workers (garbage men, janitors, custodians, etc.) who lost everything during the outbreak. Formed by Joe Ferro, they are convinced that the only way to save the city from the virus is to burn everything down, including the people still living in it. They are one of the major enemy factions in Tom Clancy's The Division and a major faction in Tom Clancy's The Division 2.

After the death of Joe Ferro and the loss of more than half of their manpower and their main source of napalm supply and production, the Cleaners were weakened to the point that they are no longer a threat to the JTF.

However, the Cleaners recovered with the help of Vivian Conley, one of Aaron Keener's lieutenants. and are a hostile faction in Tom Clancy's the Division 2. They launched an attack on Coney Island while Black Tusk was distracted by the attack of The Division. They rule over lower Manhattan, along with the Rikers.

A roaming faction, the Cleaners can appear in many districts; all agents should proceed with extra caution, especially in Cleaner-occupied territories. The faction consists of construction and sanitation workers that felt abandoned when the government and JTF pulled out and left them to defend themselves and die. Trapped in the quarantine zones, they decided to take matters into their own misguided hands. Armed with flamethrowers, fire axes, and firebombs, they travel from one area to another hoping to cleanse the city of the virus. They will burn anything they deem to be contaminated. Their terror spreads quickly like the fire they wield. They are brutal and unfeeling and hold the belief that the sick are already dead. A video recovered from the napalm production site or HQ shows footage of a civilian's phone which shows that she is burnt alive by a Cleaner when she was caught at the site. To identify their territories, agents are advised to keep a lookout for yellow-coloured garbage trucks.

Eight months after the outbreak, the remaining Cleaners allied themselves with two Rogue Division agents, Vivian Conley and Javier Kajika. Conley helped the Cleaners upgrade their utilities and weapons, they are now deadlier as ever.

As of the moment, Vivian Conley is the leader of the Cleaners. Unbeknownst to them, she also does dealing with fellow Rogue Division agent Aaron Keener.

However, with Conley dead, the Cleaners are now in total chaos. But, prior to Warlord of New York, Conley gave some of her Cleaners to Henderson for her plans.

Relationship with other factions Edit

Although it is never stated in-game and with little interaction (aside from skirmishes). the Cleaners would have most likely thought of the other warring factions as a detriment to their goal of cleansing the city of the virus.

In regards to the JTF, they believe the JTF are weak and soft and thus unable to handle the situation. Compared to them the Cleaners believe they are capable of making the hard choices and doing what needs to be done for the greater good. At the end of Dragon's Nest, Roy Benitez admits he understands their intentions and goals but still views their methods as sick and twisted. He is also genuinely impressed and disturbed by their resourcefulness.

Any animosity they have with the other factions would have likely been resolved by the time of Resistance as they joined forces with remnants of the Rioters, Rikers, and Last Man Battalion to combat the JTF and Division agents as well as to hunt down Aaron Keener.

They seem to hold a big grudge towards Black Tusk after being manipulated into believing that Vitaly Tchernenko was the one responsible for creating Green Poison and wanting revenge.

When fighting Cleaners, agents should keep a distance from them, as most Cleaners are equipped with flamethrowers and can easily burn and kill with them. Using long-range weapons is recommended. If a member of the Cleaners is shot enough in the gas tank backpack, it will explode and damage them severely, or kill them depending on their level. However, not all Cleaners wear gas tanks such as Mechanics and Shields.

The Sweeper class will usually pin down their targets while another Sweeper rushes up to burn them. The Fumigators, being the Grenadier archetype, will lob incendiary grenades, and at higher levels (31 and 32), gas grenades at enemies in cover and will sometimes assist in pinning down the target. Mechanics will rush to cover when combat starts and will place a crude turret on top of the cover. Once the turret is down, the Mechanic will then engage with his Shotgun. If the Mechanic is killed, and the turret isn't destroyed, the turret will fire at enemies randomly until stopping, which it is then destroyed. Shield wielders will rush the target with a shield and fire axe, and won't stop until they are killed. Incinerators are rare, but they are the toughest enemy that can be encountered in Cleaner areas. They slowly shamble towards their target or will run-up to it if not close enough to attack. The flamethrowers they wield will have a pretty far range and can dish out a lot of damage in a single spew. Controllers used to be encountered only in the Amherst's Apartment and the Napalm Production Site missions, but since the Clear Sky update, they are now a more common sight - particularly in Search and Destroy missions and High-Value Target Ops.

Two Sweepers at the Broadway Emporium

A group of Sweepers at the Hudson Train Yards

A Fumigator and a Sweeper

Joe Ferro, the leader of the Cleaners

The RC Car used by Mechanics. Mechanics will deploy these in Dragon's Nest and Challenging and Heroic story missions

The Four Horsemen in the incursion Dragon's Nest 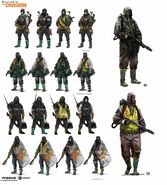 A brief description of the Cleaners from The Division's Intelligence Briefs

Incinerator
Add a photo to this gallery

For those who want to get a close look at a Sweeper, Fumigator, or Shield, play the Mission Napalm Production Site. When exiting the elevator to the hazmat area before the player(s) encounter Joe Ferro, there will be a Sweeper and a Fumigator (a shield may spawn on harder difficulties) on the other side of a glass window directly to the left of the elevator. They will react to the player(s) in a sequenced animation, then runoff. Plotwise, this is the Cleaners discovering the Agent coming to kill Ferro, then running off to warn others (others being the first group of Cleaners that run downstairs on the left and right sides of the final room).

Retrieved from "https://thedivision.fandom.com/wiki/Cleaners?oldid=46452"
Community content is available under CC-BY-SA unless otherwise noted.