The Division Wiki
Register
Don't have an account?
Sign In
Advertisement
in: People, The Division, Division Agents,
and 5 more
English

Bardon Schaeffer
Bridgette Douglas
Felix Sokolov
Dustin Xavier
Alicia Coswald
Faye Lau was a former Strategic Homeland Division agent activated after Black Friday as part of the Second Wave of agents tasked with saving what remains of New York City. When she was wounded in action after the explosion of the helicopter that killed the original Senior Second Wave commander, Louis Chang, she had to assume Chang's role by assisting the player in the Base of Operations.

In Warlords of New York, she initiated a shocking turn of events when she disavowed The Division by talking to Bardon Schaeffer after Aaron Keener activated the Rogue Network.

While enrolled at City College, Lau joined the school's ROTC (Reserve Officers' Training Corps). She used her service as a springboard to a series of appointments in military intelligence and eventually the NSA (National Security Agency), where she worked on the support staff of the Director of National Intelligence. Soon after Presidential Directive 51 was signed, Lau moved laterally into the newly formed Strategic Homeland Division as a senior field officer reporting directly to the northeast section Division Commander, Louis Chang.

After the First Wave of Division agents disappeared during the Green Poison bioweapon contagion, President Waller activated a Second Wave of agents into New York City, ordering Commander Chang to personally lead the team's insertion and operations. Agent Lau was activated to serve as Chang's second in command and senior field officer. When their helicopter was destroyed, Commander Chang was killed and Lau seriously wounded.

Barred from field work due to her injuries, Agent Lau has served as acting Division Commander for the region, working from the N.Y.C. Base of Operations located inside the James Farley Post Office in Pennsylvania Plaza. Her current role is primary contact and "handler" for all Division agents active in the New York City area. (NOTE: This has changed since she went rogue)

Faye Lau was activated as part of the Second Wave of Division agents in Brooklyn along with the player, with whom she was to partner up with.

After regaining control of Brooklyn, she and the player were awaiting a VTOL carrying other Second Wave Division Agents and Senior Second Wave Commander Louis Chang. Unfortunately, the VTOL was destroyed in an explosion (later revealed to be caused by an LMB surface-to-air missile) just as it landed, killing everyone on board and critically injuring Faye, whereas the player suffered minor injuries and was knocked unconscious.

After the explosion, a Joint Task Force helicopter came to their aid and transported the two agents to Camp Hudson.

After the player gains control of the N.Y.C. Base of Operations, Faye takes the role of acting commander of The Division in New York. She then continues to provide strategical support to the player and other remaining Second Wave Division agents in New York.

Faye is once more seen in a cutscene for Tom Clancy's The Division 2, killing an Incinerator boss type after the reactivation of the SHD Network, implying that she fully recovered from the injuries in her ongoing quest to take back New York City back seven months after the Green Poison, as well as being indirectly mentioned in an audio recording found in Washington, D.C. detailing Roy Benitez's reaction at hearing two Division agents have been brought in.

In Warlords of New York, she is the acting commander of The Division in the city, as well as leading the hunt for Aaron Keener, but the New York Division branch has been crippled after a devastating hurricane rocked Lower Manhattan, as well as new leadership in the forms of Rogue Agents leading returning factions such as the Cleaners and the Rikers.

With help from Alani Kelso and other Division agents from Washington, D.C., she continues the hunt for Keener. In a shocking turn of events, Lau disavowed The Division by siding with Black Tusk as her conversation between herself and Bardon Schaeffer was intercepted as the rogue agent network was activated.

The most probable reason for her going rogue was caused by her sister’s death following the attack of the Hell's Kitchen settlement. Another probable reason for her to go rogue was after close interrogation with rogue agent Alicia Coswald, who said she's on the side of The Division by going rogue. According to her, she was marked rogue when she disobeyed a direct order or directive, but however her aim was the same; to restore order. Therefore, it can be concluded that Faye went rogue because she chose to disobey the directives of The Division, and now she wants to bring the organization down in order to restore order and control by siding with the Black Tusk, who already work for a mysterious employer. She recruited several rogue agents into Black Tusk, including Shade, Dusk and Belfry.

During Season 4, End of Watch, Faye Lau's four rogue lieutenants were hunted down and killed. The intel gathered from them leads to a confrontation with Lau in Camp White Oak. While she is here, Lau kills President Ellis and frames The Division for it. She attempts to flee in a helicopter, but it is disabled before she can make an escape. Forced to fight the very agents she turned her back on, she is killed. After her death, several audio logs are discovered. The logs tell a story of Lau going rogue solely to work her way up in the BTSU ranks in order to assassinate the president. Her main aim was to eliminate the corruption that prevents order being restored.

A second generation Chinese-American, Lau’s parents were killed in a car crash when she was a seventeen, leaving her to raise her younger sister Heather Lau. Owed, in part, to the loss of her parents, Lau has kept a distance from intimacy for much of her life, having regarded it as a potential disruption to her education and career. Now that the Green Poison has hit, however, Lau has realized that she may be more attached to the surrounding people than she previously believed. A light in this is the attachment to her sister and worry that something bad may have happened to her when she goes missing from Camp Hudson.

Lau later joined Reserve Officers' Training Corps (ROTC) at City College, after which she excelled through the upper echelons of government intelligence and national security. After a field accident left her left leg and right eye severely injured, Lau now serves as a “handler”, responsible for the base’s maintenance and collecting and giving intel to the player.

Competitive, driven, and full of grit, there is no question in Lau’s status as a devoted patriot or her belief in the system. Though her peers typically regard her as a strong, serious woman, she has a caustic sense of humor, a knack for knitting, and a secret love of romantic movies.

By the Warlords of New York campaign, she is much harsher than before, and more aggressive. This may be attributed to Heather Lau, her younger sister, having been killed during a Riker attack on a settlement in Hell's Kitchen, which caused her to start drinking. Over the course of the campaign against Keener and his rogue agents, Faye is shown to drop hints of doubt in The Division's ability to truly defeat Keener. 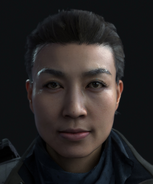 A brief summary about Faye Lau in The Division Intelligence Briefs.

Faye Lau during the SHD Network restoration cutscene in The Division 2.

Faye Lau in a boat with her Smart Watch and talking to Bardon.