Global Events are a feature in Tom Clancy's The Division that were added in Patches and Updates/Update 1.7. Global Events add modifiers to the open world environment and missions. While one modifier is always active and cannot be turned off, two different modifiers can be applied to increase rewards and difficulty in a mission. Participating in Global Events will reward players with GE tokens that are used to buy Encrypted Caches and unique vanity items from the Global Event Vendor in the GE area. Global Events have a leaderboard, similar to the Dark Zone, and at the end of each event, top players will be awarded.

Severe Outbreak
Outbreak behavior, plus enemies are "contagious" and will drain agents' health when close.

Critical Outbreak
Severe Outbreak behavior, plus headshot-marked enemies are killed instantly by a headshot from another agent.

Gameplay
The Outbreak Global Event favors a gameplay style that focuses on dealing headshot damage. Marksman Rifle builds that have high damage will work well on this. High aim is required to deal the headshots from a distance, but the additional headshot damage will make fighting Elites and Named Enemies much easier

When Severe Outbreak is applied, being close to the enemy is extremely dangerous. In addition to damage done by normal attacks, the rate of health drainage is high, much more than Survival's hypothermia and Underground's sickness modifiers. Having a Support Station and First Aid equipped will only delay the player from going down.

With Critical Outbreak applied, teamwork is paramount. With the special headshot marking, it can make even the Dragon's Nest incursion much easier even on Heroic difficulty. However, the duration on the mark is only 3 seconds, making it paramount to react quickly to kill the target.


Crucial Assault
Assault behavior, plus all enemy damage is increased at longer range

Ambush Face Masks (note that players must be playing missions on at least Hard Difficulty, along with being on World Tier 5 to achieve these commendations)

Blackout - agents are equipped with Shock Ammo that stuns enemies. Shooting or running builds your Charge meter - the more Charge, the more damage you inflict.

Blackout behavior, plus you can instantly kill enemies with Overcharged melee attacks, but if you miss - or your Charge meter exceeds 100% - you will stun yourself and nearby allies.

Extreme Blackout behavior, plus your Charge meter will cool down faster when close to other group members.

Onslaught behavior, enemies are vulnerable to one effect type and resistant to others. Agents take increased damage from resistant enemies.

Savage Onslaught behavior, plus when two or more group members kill a vulnerable enemy within two seconds, each member can reload to gain a damage bonus for a single clip [sic].

During the month of March 2018, Tom Clancy's The Division held the Global Event Anniversary (along with celebrating 20 million players of Tom Clancy's The Division since launch). During this celebration, each weekend a different Global Event was active. There were no new rewards for the events, however the caches bought with Global Event tokens returned, allowing players to have another chance at completing their Classified Gear Sets more easily. Commendations and Face Masks also returned to give players a second chance at receiving them.

When the Global Event has ended, players will be rewarded with caches. Along with Gear Piece Caches, players can be rewarded with a Vanity Cache containing weapon skins, or backpack skins. Face Masks were originally awarded to top leaderboard players, but were moved to Commendations after players were finding exploits to boost themselves higher on the leaderboards, kicking fair-playing players out of the competition for the Masks.

Depending on the player's position on the leaderboard, the amount of caches and Vanity items can vary between 1-3. These caches can be found at the Rewards Vendor in the Base of Operations. 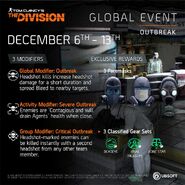