View source
watch 01:34
What is Hunter?
Do you like this video?
Play Sound

Unknown (they only show extreme hostility towards Division agents)

Taylor (N.Y.C.)
Stanton (N.Y.C.)
Davis (N.Y.C.)
Nicholls (N.Y.C.)
Bear (D.C.)
The Hunters are a one-of-a-kind enemy faction first introduced in the Survival update in Tom Clancy's The Division and is arguably one of the most dangerous foes a Division agent can encounter.

With the ability to imitate Division agents, these Hunters have increased mobility and the ability to use Skills; their tactics and behaviors are more similar to players than any other type of enemy, as well. Hunters can be clearly identified by the multiple glowing orange and red Smart Watches they wear as trophies from agents they have executed.

The identity and motives of the Hunters remain a mystery, but they show extreme brutality to Division agents that is nothing short of homicidal in nature, to the point where they will use an axe to melee and execute them while they are downed.

Each Hunter has a different appearance, but they share the same overall motif of dark heavy armor and dark ballistic masks. The Hunters are also adorned with SHD watches taken from the agents they have killed, as well as military grade equipment and armament.

There are five distinct appearances for the Hunters:

In Tom Clancy's The Division 2, each Hunter wears a unique recognizable mask, that they drop upon being killed.

Hunters have extreme mobility equal to that of players. They are capable of imitating and copying players such as rolling to avoid incoming fire and grenades and have faster-sprinting speed and mantling compared to other NPCs. Hunters will aggressively assault players in an attempt to force them into a corner. Unlike other Chargers who take a straight path to the player, Hunters will move from cover to cover quickly in a zigzag pattern towards the player. When working with other Hunters, it is common for one to suppress their target will the other tries to flank them.

The Hunters, while being classed as an Elite, do not have armor (excluding Resistance), along with fairly low health, making them as vulnerable as a player. High-end weapons are recommended to use against Hunters as they deal with the highest potential damage compared to other weapons of various Rarity.

As of Update 1.8: Resistance, players who engage in the Underground DLC will now have a chance to encounter Hunters mid-mission for a rare chance to get classified or exotic gear. If the player or squad is killed, the Hunters will not spawn in again and the player or group will continue with the normal mission. Hunters are included in Resistance mode as well, and once players successfully reach Wave 15 and up, Hunters are added to the waves of enemies with increasing difficulty of each wave beyond 20, each with varying skills, armaments, and most notably, armor.

A Hunter will also spawn on Legendary Difficulty missions if the group has not yet wiped, along with the bosses. Although they have no armor, their health pool is extremely high. On death, these Legendary Hunters drop one Exotic item. They can spawn on the following missions on Legendary:

Players with the D3-FNC gear set and/or substantial Skill Power can use the Ballistic Shield to prevent them from being down with a melee attack; this however leaves the agent with heavy damage to their shield.

In Tom Clancy's The Division 2, to fight a Hunter you must first follow a series of clues that will lead you to its location. Upon killing the Hunter, you will acquire its face mask.

Open world Hunter encounters can only be activated after the mission Agent Edwards Support. In this encounter, the D.C. agent searches for Agent Edwards, who has already been killed by the Hunter. After inspecting the body of Agent Edwards, a Hunter will appear and engage the agent in a small skirmish, after which the Hunter will shock the agent, taunt them, then flee. After the completion of this side mission, all other Hunter encounters are unlocked. Additionally, one unique Hunter wearing an unobtainable skull mask has an important role in Warlords of New York Season 3 - Concealed Agenda.

Getting close to a Hunter is extremely dangerous and ill-advised, as they can instantly down any player with a melee attack. If an agent goes down, they may become vulnerable to a Hunter's execution assuming the Hunter isn't busy with another agent. Should an agent go down and no other threats are present, the Hunters will then enter execution mode in which they will shock the player with a Sticky Bomb Launcher, preventing them from moving, and eventually close in for the kill with their Combat Axe. This type of tactic can make revivals far more dangerous and lethal for any agent trying to get their downed comrades back in the fight as they may lie unconscious in an unfavorable, often exposed position.

Hunters will use a variety of skills, provided by the SHD Tech they had acquired from previous agents. Similar to First Wave Division Rogue agents, a Hunter can hack the SHD Tech of its enemies and turn them against their user and group members. Hunters will also throw different types of grenades and send out EMP pulses, disrupting any skills.

In The Division 2, Hunters have access to four armor kits (the same amount as players who have upgraded their Armor Kit perk at the Base of Operations), and a combination of two-player skills (Most listed above, apart from the summit).

Hunters carry a variety of weapons, depending on their type. They have access to one long-range weapon (MMR, LMG, AR) and one short-range weapon (SMG, SG). 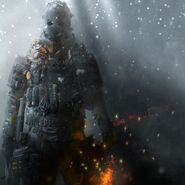 A Hunter executing a Division agent.

Side view of Neurotic.

The first Hunter you encounter in D.C. during Agent Brooks call for backup

The Demon Hunter from Agent Brooks?? 1 of 2

Hunter, which appears during Season 3: Concealed Agenda. Note the skull tattoo on the left arm.

Hunter spotted and about to disappear in smoke