The Division Wiki
Register
Don't have an account?
Sign In
Advertisement
in: Enemies, The Division 2, Factions
English

Survive and cause chaos over Washington, D.C.

The Hyenas are a major enemy faction in Tom Clancy's The Division 2. While combining the killing instinct, thievery premise, and the firearm combat discipline of the Rioters and the Rikers in Tom Clancy's The Division, these roaming scavengers are thieves and murderers, who prey on the weak and incautious for resources and kill for kicks, as well as destroying everything they can't salvage to hobble their enemies.

After The Division brought most Council members to justice, including the ones in the District Union Arena, the Hyenas become disorganized.

However, two council members remain active and at large: Mayhem and Zodiac.

The Hyenas are a loosely organized gang of hedonistic scavengers who rely on violence and intimidation to prey on struggling civilian encampments. These opportunistic raiders have no greater agenda other than to exploit weakness and vulnerability of those who were torn by the outbreak of the Green Poison, and thrive by capitalizing on the misfortune of citizens that were affected by the outbreak.

As civilized society collapsed in the greater metropolitan area of Washington, D.C., citizens who gravitated to acts of depredation - stealing, plundering, raiding, pillaging, ambushing, double-dealing, etc. - to survive began to band together into clans to further gain supplies for their plundering. Some named themselves and claimed turf, similar to how youth gangs operate. But most were amorphous groupings whose membership and leadership shifted from day to day.

As the brutal, anarchic winter turned into spring, six larger clans rose to prominence in the shattered streets north of Constitution Avenue. For weeks, their vicious turf battles destabilized entire neighborhoods and terrorized the surviving citizenry. But in February, these six clans called an interpack truce that led to the creation of a so-called "freedom council" with each clan represented (many lesser clans exist but are not represented). This council has declared a series of purposes that they've termed "freedoms":

The council also made one final declaration. The leaders created an umbrella designation for all six clans, calling themselves the Hyenas and officially making them unified into one technical clan.

Despite a lack of centralized organization, the Hyenas are shrewd and well-inured to the use of violence. They care nothing for civilians other than as possible resources of survival goods, sometimes even terrorizing, killing, and hunting merely for sport or their amusement. They are callous opportunists, not only preying on a disrupted city but also actively resisting and undermining stabilization efforts by local and federal authorities in order to keep themselves in control of the settlements without any federal government interference.

The Hyenas leadership and government structure is a combination of a federation and an autocracy. As a federation, the Hyenas are led by a Council of Hyena clans. Each clan is self-governing and relatively independent of one another but are all unified as one. As an autocracy, each clan is led by a single leader who has absolute authority over his/her own clan and represents them within the council, acting as the speaker that voices the choices of his/her clan represented in the Council.

Originally the Hyenas were divided and often fought each other for control of turf to spread each clan's influence until a clan leader named Coyote proposed to other clan leaders to unify together. She argued that they all faced a common foe, the True Sons, and that they need to band together if they were going to survive. After much debate, the other clan leaders agreed with Coyote and thus the Hyena Council was formed.

Much like their animal counterparts, the Hyenas are generally opportunistic raiders and scavengers who prey on the weak but can also stand their ground against more powerful foes. The Hyenas appear to consist mostly of late teens and young adults who are either criminals, affiliated with gangs before the outbreak, and normal citizens who wish to cash in the anarchy and lack of law enforcement caused by the Green Poison. In fact, they've been known to manufacture drugs as drug labs can be seen within Hyena occupied buildings.

Despite this, as a faction, they are relatively organized and intelligent as they are able to re-purpose and use military weapons (miniguns and grenade launchers), creating sniper turrets from SHD devices, and manufacturing creative combat devices such as RC cars rigged with C4 blocks. Also, their council is shown to possess a decent level of government structure. The Hyenas mark their territory with green paint, graffiti, fumes and dead civilians having been used as target practice.

Their general combat skills are typical of a group of criminal gangs, as they show little coordination or discipline, with little regard for what the other combatants are doing. They disregard using cover or aiming with their weapons on a regular basis, and some simply take drugs and charge into battle.

Perhaps as an indicator of their territory, they dislike using assault rifles, snipers, and light machine guns, typically using sub machine guns, pistols, and shotguns. Typically, Shield, Rusher, and Assault archetypes are found closest to enemies, firing away. Medic, Engineer, and Tank archetypes are found behind them, usually setting up their equipment, reviving any dead Hyenas, and laying down suppressive fire for their allies. Controller, Thrower, and Sniper archetypes are found at vantage points in the battlefield, using their gear to support their allies, disorient enemies, and acting as additional ballistic suppression. They typically favor rush tactics, panicking at close range if surprised, and attempt to melee even if the aggressor has a shield, showing a relentless desire to strike down any invaders and enemies.

However, Diesel and his lieutenant, Rebound were in Downtown West, suggesting the Hyenas were trying to expand west, while the Outcasts were distracted by their territory war with the True Sons in West Potomac Park.

They are hostile towards the Outcasts as an ECHO located on H Street NW, near the World’s End control point provides evidence that at least one group of Hyenas and at least one group of Outcasts were fighting over territory while trying to take out a squad of True Sons guarding a building in Downtown West. This suggests that the Hyenas see the Outcasts as a threat to their survival in Western D.C., and are trying to keep them at bay till they can muster the numbers needed to crush their control of West D.C.

Following the death of several Hyena Council members and the invasion of the Black Tusk, the Hyenas are now at war with every faction and are vying for control of positions within Washington, D.C.

As shown by the heroic bounties, Capitol Trash and South Lawn Pack, the Hyenas have started trying to organize themselves by fighting Division agents to decide a winner and select a new council member from their ranks. The Division swiftly took care of these threats in order to prevent the Hyenas from reorganizing.

However, Venus has recruited some of the Hyenas along the Cleaners to create some kind of plan in D.C. However, what this plan is currently unknown.

The Hyenas would try to flank you in order to gain a tactical advantage. Their skills are unorthodox, as they simply disregard cover, shoot without aiming their weapons, or simply take spice and charge towards their foe. Their skills typically involve forcing you out of cover and inflicting status effects - the throwers and controllers try to force you out of cover, the snipers will try to blind you, and the engineers will try and kill you with their sniper turrets. The medics usually revive their fellow Hyenas, but will not hesitate to fight you head-on, even if it's suicide. The assault usually flanks and fires as they go, while attempting to outflank you themselves.

The Assault unit are deeply indoctrinated by the Hyena's ethos. They are unorganized and inexperienced in combat, relying on intimidation and constant gunfire to make up for their shortcomings. The Assault unit use raiding and looting to instill fear into the citizens of D.C.

Throwers are erratic and unpredictable. They recklessly use demolitions, often endangering the lives of themselves and their allies. Some Throwers create their own explosives using looted industrial-grade chemicals.

Engineers use sniper turrets and suppression tactics to subdue their enemies. Without their turrets, they have little combat value; therefore, they will do everything in their power to keep their weapons operational, even if it means exposing themselves to enemy fire.

Medics are adept at administering injections quickly and under duress. Many of them are believed to be comprised of addicts and former drug dealers. Medics are heavily involved in spice production and often volunteer themselves as test subjects in order to evaluate new strains.

Snipers are arrogant and ruthless. Unlike their military counterparts, discretion is not their forte. Despite this, they panic in close combat and will flee when their enemies get too close. Snipers train daily and keep a kill count among themselves.

Controllers have knowledge of mechanics and are considered the "intellectuals" of the Hyenas. They operate remote-controlled cars rigged with explosives and treat the battlefield like a playground. Their lack of danger perception is both their strength and weakness.

Tanks are armed with machine guns and try to overwhelm their enemies with persistent fire. They were selected for their size and ability to carry a lot of weight. Off the battlefield, they are responsible for keeping order inside Hyena strongholds.

The Shield unit engage enemies at close range and often express dissatisfaction towards allies who use safer tactics in combat. Off the battlefield, they work as enforcers, using violence and intimidation to strengthen the Hyenas' foothold on the city.

Rushers are delusional and unyielding, using drugs to boost their confidence and adrenaline. Recognized by their stolen police batons, many of them are believed to be former criminals who were serving jail time when the Green Poison hit D.C.

A Hyena Tank with all of his armor broken. 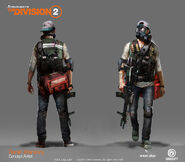 Concept art of the Hyena Assault 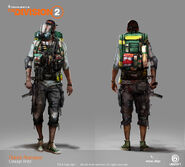 Concept art of the Hyena Medic 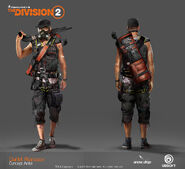 Concept art of the Hyena Engineer 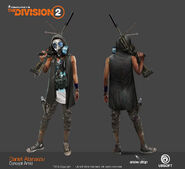 Concept art of the Hyena Sniper 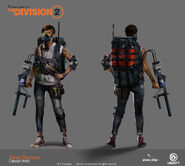 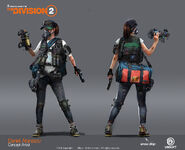 Concept art of the Hyena Controller

Concept art of the Hyena Thrower

Concept art of the Hyena Shield

Concept art of the Hyena Tank with and without armor

A member of the Hyenas.

Division agents in a gun battle with the Hyenas.

Division Agents being attacked by Hyenas.