Little is known about the Black Tusk Special Operative known only as "Mantis". Physical description and fingerprints match those of former U.S. Army Ranger Linda Kalb, but Defense Department records list her as KIA. Whether those records have been doctored, or whether Kalb's identity has been stolen still remains to be determined.

She has a powerful build, short black hair and blue marksman's eyes.

Mantis holds a key position within the Black Tusk organization, coordinating their support of outside affiliated groups. Plus recruiting a former Division Agent Ike Ronson to be her double agent.

She's a weapon and explosives specialist, and an expert CQB fighter with an even temper and analytical mind.

She brutally killed Caleb Dunne's partner Mathias Kaminsky on March in New York City. That made Caleb sworn to track down her. On his way, he met up with Heather Ward and Brian Johnson then captured her.

She's later killed by one Black Tusk sniper about 800 yards (731.52 m) to prevent her spilling its secret plans after the SHD Network had gone dark. 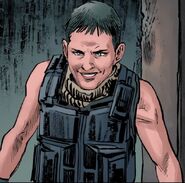 Mantis without her mask.
Add a photo to this gallery
Retrieved from "https://thedivision.fandom.com/wiki/Mantis?oldid=48108"
Community content is available under CC-BY-SA unless otherwise noted.