The Division Wiki
Register
Don't have an account?
Sign In
Advertisement
in: The Division 2, Enemies, Factions
English

The Outcasts are a major enemy faction in Tom Clancy's The Division 2. Composed of the bitter Roosevelt Island quarantine survivors, they are hell-bent on revenge against society because they were placed in a forced quarantine that was poorly run and killed many. Their leader, Emeline Shaw, believes everyone is complicit and urges her followers to punish the guilty by spreading sickness and murdering indiscriminately. They are notorious for their sadistic nature and religious-like devotion to their cause, which is reflected in their use of suicide bombers, Molotov cocktails, and flamethrowers. Their goals have even attracted those who weren't part of the quarantine on Roosevelt Island including those with law enforcement or military training.

Their fanatical devotion to their ideals are somewhat similar to the Cleaners, and some Outcasts even utilize homemade flamethrowers that resemble the Cleaner's custom rifles. However, their goals appear to be the complete opposite of each other: The Cleaners wish to burn away all traces of the Green Poison, regardless of what must be sacrificed in the process, whereas the Outcasts want to spread death, disease, and misery wherever they go, seeking revenge against a society that let them suffer under the corrupt JTF soldiers that would later form the True Sons.

The Outcasts faction consists of the bitter survivors of a forced (and admittedly ill-advised) CERA quarantine on Theodore Roosevelt Island and adjoining areas along the Potomac River. This murderous crew is bent on revenge against the authorities who confined them on the island, and the society that stood by and let it happen. Comprised mostly of locals drawn from many walks of life, Outcasts embrace an extreme nihilism. This in turn fuels a grim fanaticism that drives them to fearless aggression.

As the smallpox outbreak spread out of control in January, CERA and local D.C. authorities put a panicked, desperate plan for a forced quarantine into place. Soldiers cordoned off Theodore Roosevelt Island and sections of the eastern shore of the Potomac River (including the John F. Kennedy Center) from the rest of the city. Then JTF special units rounded up infected civilians from all hospitals and refugee camps and shipped them into the quarantine zone.

The zone's hastily erected facilities turned into a living nightmare for both the patients and medical staff. CERA established a triage center in the JFK Center, with the inpatient housing area isolated on the river island. The name "Roosevelt" quickly became synonymous with "death trap" as deceased pandemic victims piled up in the island's makeshift morgue.

Ultimately, not everyone quarantined was infected, and not all of the infected died. Many Roosevelt survivors were severely traumatized by the horrors they were forced to endure. One woman, Emeline Shaw, arose from their ranks and began to gather followers. Shaw, who had contracted the disease in quarantine and survived, was so consumed with rage that she organized a phalanx of "carriers" - people who, like her, had survived to become asymptomatic carriers of the smallpox virus. Her plan was to spread the disease to all as-yet-uninfected areas of the city.

According to intelligence reports, her exact words were: "None shall escape."

Outcasts would do anything to spread the disease and, just as important to their designs, a paralyzing fear of the disease. Simply put, the cult seeks to terrify, infect and kill everyone in the district. Recently, a Division source acquired an internal declaration of the Outcasts' primary objective:

"This city left us to die. We will not stop until everyone in it lies cold, sick, and dead: eradicated. Vengeance will be ours."

Thus, the Camp Roosevelt Island survivors have their sights set on gutting the population of the nation's capital - every citizen and public official, alt law enforcement and military personnel, local or federal. This includes all competing factions in the region, particularly their crosstown rivals, the True Sons.

The Division's intelligence wing has compiled the following analysis of Outcasts culture:

Having suffered from their quarantine from the JTF under Colonel Ridgeway's administration, the Outcasts pursue only one goal; revenge. They seek to bring about calamity and destruction to those that wronged them and see any 'bystanders' as equally guilty for doing nothing but watching them suffer in Roosevelt Island. Their followers' zealous devotion to their leader and their cause, the usage of distinctive, if not, poetic titles by some members, and their leaders' religious guidance is among evidence to suggest the Outcasts is a cult. They might even see their revenge against the world as a crusade of sorts. Their irrational mindset, however, does not stop them from being sophisticated and thinking outside of the box. The Outcasts' usage of homemade weaponry and the diverse combat style is a testament to their unorthodox, yet effective ingenuity. They typically identify their territory with "decorations" of glass shards wrapped in caution tape and burning biohazard boxes with the Outcast symbol as seen on the bridge to Roosevelt Island.

When they were organized and had a designated leader, they were a high-level threat as they had begun to use biological warfare against The Division and The Campus, and would launch concentrated attacks. They had also established multiple base of operations - Roosevelt Island being their primary base, but having bases at the Manning National Zoo, and Kenly College.

But after The Division's concentrated campaign against them, they lost all their operating bases, weapon supply, and leaders, making them a low-to-medium level threat in D.C.,however they maintained a surprising level of organisation that was not seen among any other faction native to DC.

The Outcasts despise the True Sons and mark them as the ones primarily responsible for the quarantine and treatment as they (as the Joint Task Force and under command of Antwon Ridgeway) were the ones who imprisoned them and left them to die in the first place. They have been known to attack the True Sons and execute any survivors. Despite this, they are not actively at war with the True Sons compared to the Hyenas and are more focused on terrorizing the Campus Settlement, such as sending people infected with Green Poison to try and infect the settlement (DCD Headquarters), and attacking anyone who is affiliated with them.

They are hostile towards Hyenas, as an ECHO located on H Street NW, near the World’s End control point shows that the Outcasts and Hyenas fighting over territory while trying to take out a squad of True Sons that were guarding a building in Downtown West.

Following the death of their leader, loss of their stronghold, and the invasion of the Black Tusk, the Outcasts are now at war with every faction and are trying for control of positions within D.C.

However, Neptune has joined forces with some of them along with the Cleaners to create some sort of plan for D.C. Unfortunately, the Division located them and send an Agent to drive them off. Eventually, Neptune along with his Outcasts and Cleaners troops died to the Division and disrupting their plans for D.C.

After the event of Shadow Tides, Hornet recruited some of the Outcasts for his plans. Termite use some of them to unleash the Eclipse Virus on Washington. Meanwhile, Hornet sent Outcasts reinforcements to Luna for her plans for the Eclipse Virus. Huntsman uses some of the Outcast troops to attack Washington, D.C. After all of Hornet's Lieutenants were killed by The Division, most of the remaining Outcasts in Hornet's control retreated into the Black Tusk Tidal Basin Stronghold, before being killed by The Division itself.

After a few months since Hornet, Skyler "Belfry" Williams emerged with his Outcasts troops and Black Tusk reinforcement to wreck havoc to the Division while the Black Tusk continues its recruitment drive for Rogue Division Agents. However, he along with both Outcasts and Black Tusk troops died after the Division located him and finished him off.

Outcasts are generally as their name suggests - they are brutal, unfeeling killers and murderers that prey on a society that they feel had left them to suffer and die on Roosevelt Island. They are suited to hunting and killing unarmed combatants, however can stand their ground against more dangerous foes such as Division agents. They consist of men and women who have either survived the quarantine on Roosevelt Island or were sympathizers that joined the Outcast cause. As noted about their armament:

Outcast Supports should be priority targets if there are no Heavy Weapons or Rushers nearby, as they deploy incendiary round boxes. Tanks are their own target as they have strong armor and a dangerous melee attack, but are harmless at long range. Scorchers can be disabled by shooting their fuel tank, which makes their flamethrower useless and forces them to switch to a pistol. Snipers are dangerous to distracted agents, but can be distinguished by their glowing sight when they are aiming. Heavy Weapons are a serious threat, especially on higher difficulties as their fire can chip away an Agent's armour incredibly quickly, however can be incapacitated by shooting their ammo belts.

The Assault Unit are survivors from the Roosevelt Island Quarantine who wish to seek revenge on those responsible. Although they lack combat experience, they fight with passion and are quickly learning their way on the battlefield.

Throwers are equipped with Molotov cocktails made from whichever explosive or flammable compounds they can find at the time: petrol, gas, industrial-grade laundry detergent. Throwers are prone to self-immolation. It's not uncommon for them to perish during the manufacturing process.

Snipers use a bow and arrow on the battlefield to preserve ammunition. When they are not fighting, they spend their time crafting arrows and experimenting with different arrowheads.

Controllers operate RC cars equipped with spinning blades. They find a great sense of satisfaction in seeing their enemies get brutally slashed apart. Many of them previously worked as mechanics or engineers.

The support unit's primary objective is to provide their allies with ammunition on the battlefield. Picked for their speed, they are comprised of the most physically fit members of the Outcasts.

The Heavy Weapons unit uses light machine guns and suppression techniques to immobilize their enemies. Many of them were formally riot police and know the streets of DC well. They often hold live drills in rural areas of the city to test new tactics.

Scorchers were originally formed to utilize the Outcast's abundant fuel supplies. They began using flamethrowers in combat and quickly became one of the most feared units on the streets of DC.

Tanks have been recruited based on their physical strength. Once they've picked a target, they won't stop attacking until their victim is dead. Outside of combat, Tanks perform most of the manual labor tasks inside Outcast settlements.

Rushers are suicide bombers that are infected with the Green Poison. They know they have a short life expectancy ahead of them and want to take down as many of their enemies as possible when they die. Rushers often spend their final hours listening to propaganda. 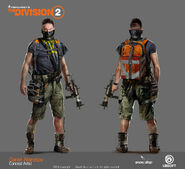 Concept art of the Outcast Support

Concept art of the Outcast Tank with and without armor

Concept art of the Outcast Scorcher.

A Outcasts Logo and Sniper.