The Division Wiki
Register
Don't have an account?
Sign In
Advertisement
in: Skills, Abilities, SHD Tech, The Division

The Sticky Bomb is a Tech

It is a piece of SHD Technology that lets an Division Agents fire an adhesive-tipped bomb that attaches to any surface (including enemies) and is manually detonated for explosive damage in a radius.

It is one of the two skills immediately available to all agents upon starting the game, alongside Pulse.

All the Skill Mods require the Tech Wing Upgrade - Generators.

Base values for the Sticky Bomb at Level 30 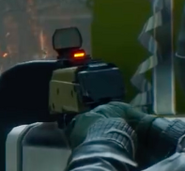 Backpack attachment when skill is equipped.