Start a Wiki
watch 01:52
What is the Strategic Homeland Division?
Do you like this video?

President of the United States

Saving What Remains, assuring the continuity of the U.S. government following a catastrophic event.

They are fully autonomous field operatives trained to restore order to communities suffering from catastrophic events, institutional collapse, and societal breakdown. Division agents are embedded in society, leading ordinary lives until they are activated. The Division is not an elite unit in the traditional military sense. They are a civilian agency whose members do not train or deploy like military units. Elite military forces are trained for specific tasks with a completely different mission specification than that of The Division. The Division is made unique by its connection to Directive 51 and its interconnected but autonomous networked organization. It is The Division as a whole that is special, not necessarily each individual agent. Officially, agents of The Division are counted as federal agents, in direct service of the United States federal government.

The main objective of The Division is to ensure the continuity of government in the case of a catastrophic emergency. There is a possibility their jurisdiction is worldwide as they are brought in when society falls. Released in waves, Division agents are activated when all other forms of public protection have failed and the President signs Directive 51 in order to activate The Division.

Following the completion of the mission and averting the crisis, The Division agents are deactivated and return to their daily lives.

Agents are hand-picked from various aspects of society. Commonly they have a background in military, law enforcement, intelligence community, rescue services or engineering. They are approached and recruited based on a set of criteria. Which includes as following:

Such recruitment can take a long time to make sure the candidate fits the profile and is suited for this type of job, and often, candidates are recommended by word of mouth from existing members. Once the Strategic Homeland Division has determined a candidate has adequately fulfilled requirements, candidates are offered to join.

After joining, members are trained by other top tier operatives. Due to the the need of maintaining the anonymity of the agency, the Strategic Homeland Division employs training covers. For example, lethal combat instruction may be billed as an exclusive "black-belt-only class" at a local gym with "special instructors".

When candidates successfully complete their training, they return to their daily lives. A key component of The Division is that members exist in the "shadows" and function as a normal member of society. Their own families don't even know about their appointment to the agency.

At some point following the Operation Dark Winter training exercise, the President signed Directive 51 to create The Division, as preparation, should the circumstances following Operation Dark Winter become realized. The Division began recruiting and training many men and women from the populace to become their sleeper agents. Despite Directive 51 being kept a secret, information about its existence was leaked, and reporters like Rick Valassi were actively investigating it.

In response to the burgeoning anarchy in wake of the Green Poison outbreak on Manhattan, The Division activated its First Wave of agents to carry out the mission and aid the Joint Task Force, with the brunt of the wave sent to defend central Manhattan, where the virus was originally released and where the anarchy began.

The Division's operations in central Manhattan failed, and the JTF was forced to evacuate and construct a wall around central Manhattan, creating the Dark Zone, and leaving many First Wave agents to fend for themselves. Angered by the heavy casualties the First Wave suffered in the Dark Zone, Aaron Keener decided to go rogue, convinced many of his fellow surviving agents to do so as well, and killed off those still loyal to the Division. Keener made contact with Charles Bliss of the Last Man Battalion and aligned his agents with PMCs. The former making use of the latter's manpower and supplies, and the latter utilized the Division technology in exchange. In response to the inevitable arrival of the Second Wave, Keener arranged for the LMB to arm a surface-to-air missile to destroy the helicopter transporting Second Wave personnel.

The Arrival of the Second Wave Edit

A Second Wave Division agent (the player's character) has been activated and was currently in Brooklyn. They made their way to the local safe house and made contact with fellow agent Faye Lau. After restoring order to Brooklyn and helping the JTF retake control of the police precinct, the agent joined Faye at the landing zone to meet Commander Chang. However, much to their shock and horror, the VTOL is destroyed by the LMB's SAM, killing Chang and a part of the Second Wave personnel on board, and severely wounding Faye. A JTF helicopter comes to their aid and transports the two agents to Camp Hudson.

After landing, the agent makes their way to the JTF's Base of Operations in Pennsylvania Plaza. Finding the base under attack by Rioters, the agent comes to the aid of the JTF garrison and repels them. After saving the base, the agent meets Faye again, but her injuries from the Division VTOL's destruction made her unfit to carry out the mission alongside the agent. Instead, Faye provides support to the agent by becoming the acting Division Commander.

A Medical Wing is established in the Base of Operations by Jessica Kandel and the agent must help improve it to both help the citizens and to research a cure.

A Tech Wing is created by Paul Rhodes in the Base of Operations in order to stabilize the city's supplies, help civilians with technology-related problems, and reestablish communications.

The Security Wing, led by Roy Benitez, works to secure the city and protect the civilians from the hostile factions that roam the streets.

Roughly seven months after Green Poison crippled New York, escalated cases of agents going rogue have occurred outside of the aforementioned city. Dissatisfied agents have different reasons for such, some followed Keener's lead due to wanton discontent, some for loot and treasures in Dark Zones and/or dangerous areas, and some who simply wish to return home to protect their loved ones. The SHD Network goes offline throughout the United States, causing select agents who vowed to continue The Division's goal to save what remains to head to Washington, D.C. in which they are billed as modern-day sheriffs by Manny Ortega.

The Strategic Homeland Division is divided into three main departments that deal with all aspects of SHD.

The Division’s organizational structure is decentralized. To that end, the SHD maintains three headquarters facilities, known as Cores, that are separated by large geographic distances. Each Core bunker is identical and redundant, able to continue operating as headquarters of the Division even if either or both of the other cores are disabled by an unforeseen event. This planned redundancy is known as the “Rule of Three.”

The cores are located in Kansas, South Dakota, and Texas. Each Core is led by a board of directors with one of the directors acting as their Core’s manager. During peacetime, the Cores carry out routine management and administrative duties. If Directive 51 is activated each Core seamlessly transforms to coordinate logistics and intelligence across the Division network.

Division agents carry advanced weapons and gear alongside state of the art technology. Some of their equipment must also be scavenged, bartered, earned, or received in special packs and kits. Some of their gear bears their agency's logo.

Players take the role of agents in the Strategic Homeland Division. Their main task is to save what's left of New York City. Because of the independent nature of these agents, and The Division being a self-supported tactical unit, they may attack other agents and go rogue or join up with other agents to accomplish their task.

These people lead the wave of agents. Each commander is responsible for their respective wave.

These non-combatant Division agents reside within the Dark Zone's safe-houses and checkpoints. Their merchandise can only be purchased with DZ Credits.

Dissatisfied and angered by the heavy casualties they sustained in trying to maintain control of the Dark Zone, as well as abandonment by the JTF, many of the remaining agents of the First Wave went rogue. Led by Aaron Keener (who also convinced them to go rogue), they slaughtered other First Wave Division agents still loyal to The Division and formed an alliance with the Last Man Battalion. They are among the most dangerous enemies in the game.

Other agents have gone rogue for various reasons. Some simply deserted, while others stole and killed people. There is also an example of an Division agent working with the Black Tusk. 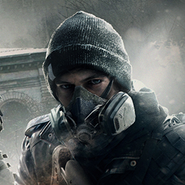 Division agents in a heavy snowstorm

A Division agent looking at an empty street

A Division agent looking at the emptiness in the street

An agent extracting their item in a extraction zone

Division agents in a gun battle against members of the Hyenas

A Division agent with their Smart watch and a handgun

Division agents in a gun battle with Black Tusk forces

Division agents in the Underground

An agent taking a rest in the Theater settlement

Division agents in a gun battle with a Cleaner

A Divison agent in the Take Back New York Cinematic Trailer

Retrieved from "https://thedivision.fandom.com/wiki/Strategic_Homeland_Division?oldid=46035"
Community content is available under CC-BY-SA unless otherwise noted.