The events of Tom Clancy's The Division 2 take place during the summer of Washington, D.C., 7 months after the events of the Dollar Flu, which took place in the winter in New York City. The virus has now spread to Washington, D.C. During the initial phase of the crisis, important personnel such as POTUS, Secretary of Defense, Joint Chiefs of Staff and other important politicians were being evacuated. The chaos of the virus began with attacks on the Pentagon, The National Mall and other landmarks. Riots followed the day after and the security forces were hit, forcing them to evacuate the capital. The dense heatwave added to more problems. The supply lines were cut off; after a few days survivors developed communities and many of them were armed, while the criminals have developed their own factions and raid these communities for supply and control. Factions like the True Sons, a group of paramilitary warlords bent on dominating their enemies and expanding their territory around Washington, D.C. These militants are led by a former JTF officer Antwon Ridgeway who, along with those that follow him, are a force to be reckoned with. Because of this, Directive 51 has been activated in Washington, D.C. and thus activates Division agents who launch a joint operation with the Civilian Militia in D.C. in order to recapture the capital.

Washington, D.C. has been recreated to be as authentic as possible complete with well-known landmarks and buildings. Despite the possible controversy, Ubisoft has stated that the choice of location was not one of politics despite the fact the chosen location is the nation's capital. [1]  Combat will be similar to the original game, with a few new features which include new skills and new weapons. Players who help the citizens in D.C. may find some willing to take up arms and join the fight.

Seven months after the Green Poison outbreak, several Strategic Homeland Division (SHD) agents are defending a civilian settlement from a bandit attack when the SHD Network, the system controlling their advanced technology and communications, suddenly shuts down and they receive a Division distress call from Washington, D.C. The player’s agent makes their way to the city where The Division and the remains of the local Joint Task Force have set up their Base of Operations in The White House. After defeating an attack on the White House shortly after arriving in the city, the agent is briefed on the general situation by Manny Ortega, The Division controller for D.C. The agent learns that much of the city is under the control of three main enemy factions: the Hyenas, a loosely organized group of several gangs, criminals, and anarchists who seek to take advantage of the chaos, the Outcasts, a fanatical group made up of the survivors of the Roosevelt Island quarantine zone, whom seek to exact revenge on those they believe responsible for their imprisonment and eventual infection, and the True Sons, a highly organized and ruthless group of former Joint Task Force personnel, paramilitaries, and other traitors who seek to gain control over the entire capital. Ortega instructs the agent to work with fellow agent Alani Kelso to help assist civilian settlements, fight the various enemy groups, and restore the SHD Network. Meanwhile, Ortega and Kelso uncover information that a cure to Green Poison might be located somewhere in the city, and that President Ellis may have survived the crash of Air Force One and is being held by one of the city's factions. Kelso is reluctant to waste time and resources to rescue Ellis, but Ortega points out that his security clearance may be needed to access the cure.

The agent continues to work to liberate city districts and eventually manages to find and rescue Ellis from Hyena custody. Ellis confirms that a cure to not just Green Poison, but all viral infections, exists but he can only access it with a special briefcase he had with him on Air Force One. However, the briefcase is in the possession of the True Sons who are holding it in their main base at the United States Capitol. With the Capitol too fortified to assault yet, the agent works to strengthen The Division's forces while continuing to weaken the other factions. Eventually, the agent is able to restore the SHD Network, connecting all Division agents nationwide, restoring the power and advantages of the Strategic Homeland Division to all agents across the United States. With the tide turning against them, the various factions retreat to their final strongholds - the District Union Arena, Roosevelt Island, and the United States Capitol. Victories in each stronghold break the factions up and remove their leadership permanently, leaving the factions disorganized and in disarray.

However, as the agent and The Division celebrate their victory, a new faction, the technologically advanced private security contractor Black Tusk, invades the city. Many of D.C.'s landmarks are quickly seized and Ellis goes missing, leaving the agent to head out once again to repel the Black Tusk invasion. During this time, ECHOs reveal that the Black Tusk was responsible for the shutting down of the SHD Network and that they had been planning an invasion long before the agent had arrived, supplying arms to the Hyenas and what not. Similarly, the invasion causes mass chaos in D.C., with formerly liberated areas suddenly becoming hot zones and the settlements coming under threat once again. Despite this, the agent fights through each and every landmark once again, eventually somewhat stabilizing the situation in D.C., and is able to access the Broad-Spectrum Antivirals, apparently hidden in the Ellipse Complex near The White House. It is there that the agent discovers that Ellis had actually handed the Antivirals over to Black Tusk and that they are now being held at Black Tusk's Tidal Basin Headquarters (in West Potomac Park).

Following this, the agent launches an ambitious invasion to finally remove the Black Tusk from D.C. by attacking Tidal Basin, as well as recovering the antivirals. The mission nearly ends in disaster, with desperate Black Tusk leadership attempting to launch a missile at The White House, but the agent eventually prevails, recovering the antivirals. Despite this, D.C. remains in total disarray, with four major hostile factions now jostling for power over the city in various different ways, while President and traitor Andrew Ellis remains missing.

Players will encounter different factions and groups throughout the game. Each faction has types of enemies. Every faction has their own combat styles.

In Tom Clancy's The Division 2, players have the ability to enter one of several Dark Zones. These are areas in the game with higher level enemies, rogue agents, but better loot than anywhere else in the game. While in a Dark Zone, the player may choose to go rogue for various reasons. This will enable PvP combat and have other players target you. 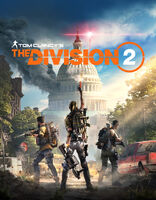 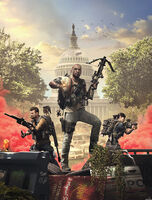 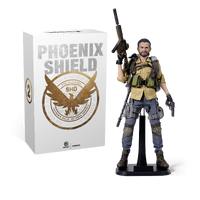 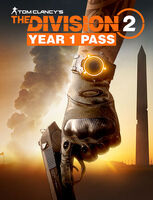