The Urban MDR is a high powered, low RPM battle rifle while having superior accuracy when compared to other assault rifles, but is offset with a lower stability. It has a strong vertical recoil if no stability mods are equipped to dampen the effect. Due to semi-auto firing, it is not advisable to use the MDR at close ranges where a higher RPM gun would be better suited.

For the Urban MDR, the first two talents are selected at random. The talent that is active is fixed at acquisition and cannot be recalibrated after Update 1.6 - Last Stand.

Talent | Distracted
Your damage is increased by 18% against targets with status effects. 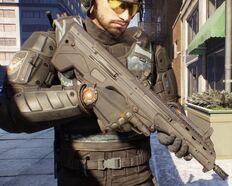 An agent wielding an unmodified Urban MDR.
Add a photo to this gallery
Retrieved from "https://thedivision.fandom.com/wiki/Urban_MDR?oldid=37817"
Community content is available under CC-BY-SA unless otherwise noted.