The Division Wiki
Register
Don't have an account?
Sign In
Advertisement
in: The Division 2, Expansions, Patches and Updates,
and 2 more

Warlords of New York is a paid content expansion added to Tom Clancy's The Division 2, that was released on March 3, 2020.

Aaron Keener, a former First Wave Division Agent who went rogue during the collapse of New York has reappeared after 6 months since he went off the grid. He now has developed his own biological weapons with the help of Dr. Amherst's notes on the Green Poison and also with the help of Vitaly Tchernenko, a Russian Virologist he kidnapped during the events of Tom Clancy's The Division.

He uses these weapons to attack The Division Base of Operations in New York City killing top Division agents and Analysts. After that, he took control of Lower Manhattan and is backed by four devoted and highly skilled former First Wave Division agents Vivian Conley, Javier Kajika, James Dragov and Theo Parnell.

Division agents from Washington, D.C. are called in for backup along with Alani Kelso and must now work with acting Division Commander Faye Lau and former Division ally Paul Rhodes to regain control of Lower Manhattan.

After receiving a distress call from New York City, the player and Kelso head out to answer the call. While requesting permission to land, Faye Lau suddenly goes radio silent. The player and Kelso then jump out of the copter carrying them once it is close to the ground, albeit under enemy fire. The agents then proceed to investigate the City Hall, discovering once they get inside that the persons responsible for the attack are Keener and his four lieutenants.

The agents then head to Haven, a settlement started by Paul Rhodes, and are initially denied entry by the Peacekeepers, the spiritual successor to the JTF, as they are less friendly and more doubting of The Division. However, Rhodes, after some persuading from Lau and Roy Benitez, tells the Peacekeepers to allow them in.

The player is briefed on the situation in light of the attack on City Hall that they helped end. Keener's whereabouts are unknown at the time, so instead the team decides to hunt down Keener's four lieutenants: Vivian Conley, Theo Parnell, James Dragov and Javier Kajika. The player is free to choose the order in which they hunt down the targets. Each target involves 3 or 4 steps to locate and eliminate, with some lieutenants having missions even after their demise to find out the grander scheme of their assistance to Keener.

With the elimination of Kajika, Lau tells the player that she will move in and secure his hideout while also securing the information he possessed, hoping it would lead them closer to Keener.

The elimination of Dragov saw the end of Keener's supply line to help move the materials for his project (which he reveals at the end of the campaign). Lau states that she and a team will secure those supplies, but also states she is unsure how many supplies still made it to Keener before Dragov's demise.

Conley's death weakens the Cleaner faction as their leader was killed again, like Joe Ferro was in the prior Division game. Lau states she will send in a team to recover the oil on the stranded tanker, as well as any info left behind, stating that "the JTF will be able to keep the generators on this winter" with the oil they will recover.

Parnell, being the tech specialist of the group, was essential in many projects Keener had going and/or was planning. His death essentially halted any projects that weren't already finished. Lau states in the debriefing that they will use his watch to try to track Keener, but that it will take some time.

In-game, the player will then need to meet 2 requirements before being allowed to access the Liberty Island mission and take on Keener; the player must be level 40, and the player must complete the Castle Clinton side mission. Once both are satisfied, the player then receives a message from Kelso that they are ready to move in on Liberty Island, where Keener is holding out on, and end this, once and for all.

Keener, however, had set up a surveillance system, which alerts him that there is a ferry approaching. While the ferry approaches, a Black Tusk hovercraft moves in and bombards the ferry with a missile barrage. The player and Kelso survive the bombardment and reach the island. As the player slowly recovers from the blast, Kelso tells the player to go on ahead as she takes her time to recover. Keener then hacks into the comms network of the agents, teasing them about making it. Kelso then goes radio silent to avoid alerting Keener to their plans. The player then fights past Black Tusk forces, including a DDP-52 Razorback, before being intercepted by a Marauder class Quadcopter (the last one the Black Tusk has at its disposal) and a platoon of heavy units.

After the player investigates a series of ECHOs in which Keener taunts the player about his resources and legacy, the player finds themselves in a room with Keener's laptop. Upon trying to access it, Keener activates several SHD Tech boxes that spawn in rogue SHD abilities, similar to the ones the player has. The player must then survive while being attacked by what is essentially The Division's own weapons, including Stinger HIVEs and flamethrowing turrets. ISAC also is tampered with during this fight, with objectives such as "KILL Paul RHODES" and "GIVE UP!" appearing on screen. After a while, ISAC recovers from its tampering and the player must then secure the area as no more SHD Tech is spawned.

Players then make their way outside, to the base of the Statue of Liberty, where Keener has set up a missile with a payload of his weaponized virus, developed by Vitaly Tchernenko while Keener held him captive. He named this payload Project Eclipse. The player is then tasked with stopping the launch of the missile, which involves capturing the 3 generators of the missile launcher, one at a time, and destroying the weak points that are exposed, followed by destroying the last weak point. During this time, rogue SHD Tech similar to the ones deployed in the previous encounter spawn in and try to stop the player.

Once the player destroys the last weak point, the rogue SHD Tech self-destructs as Keener proceeds to insult the player about being a "brainwashed puppet" for destroying Keener's project, after which he comes down and challenges the player. After a fight in which Keener disables the players' abilities, as well as deploys more rogue SHD Tech, Keener is severely wounded and manages to escape to the docks by shocking the player in place.

Once on the docks, however, Keener only makes it as far as about halfway down the docks, before needing to sit down due to his wounds. The player catches up to him, aiming their pistol at him whilst approaching slowly. Keener attempts to reach for his sidearm, but the player kicks it away before he does. Agent Kelso then appears, telling Keener it's over. However, as a last act of defiance, Keener activates his watch. The player and Kelso notice this, with Kelso interrogating Keener while the player takes his watch off quickly. Keener, in his last breaths, tells Kelso and the player that they have no idea what's coming, before succumbing to his wounds.

Kelso then signals for a helicopter from the dock. Keener's watch then activates and proceeds to play a conversation between Agent Faye Lau and Schaeffer. Agent Lau is revealed to have gone rogue and is now in league with the Black Tusk.

Once the player and Kelso return to Haven and reveal Lau's rogue status to Benitez and Rhodes, Rhodes reveals that he never trusted Lau, but he now trusts the player, as they have taken down Keener and made Haven safe again. Benitez then states that a pilot is now available to take the player back to D.C., but they are still welcome to stay in New York as there is more to be done, and they are safer when the player is in New York.

With the activation of the Rogue Network, things are getting more complicated as rogue agents answer the call and retaliate. 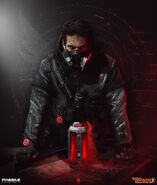 Keener and his Warlords

Division agents in a gun battle with a Cleaner

Again, Keener is seen here with his Warlords