There are several types of weapon to be found in Washington, D.C., and each weapon type can have several variations within their own category (for example: Semi-Automatic Marksman Rifles v. Bolt-Action Marksman Rifles)

Upon reaching level 30, agents unlock Specializations. These provide the agent with a structure to make a build upon. Each specialization also comes with a unique weapon that the agent may use.

This time around, your grenades will be connected to your specialization, which aren't unlocked until level 30. During levels 1-29, the Concussion grenade will be the only one available to you.

At level 30, there will be several additional types of grenades available, each tied to a specialization:

Whenever you switch specialization, you will also switch grenade type. This means that you will never have, for example, a Flashbang and an Incendiary grenade at the same time. However, the Concussion grenade will always be available, no matter what specialization you use.

This makes sure that the grenades can be powerful and useful, without being such a large part of your arsenal, thereby invalidating a lot of other sources of damage. It also means that you will have a much clearer idea of the capabilities of each player in PVP and PVE, depending on how they've chosen their specialization. Not only will it help when facing enemies, it will also add more depth to the assembly of your own squad. Based on what activity you will be engaging with, be it raids, missions, or PVP – different grenade types might be more viable than others.[1] 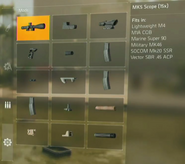 Weapon mods in The Division 2

A view of Heather Ward's weapons in The Division 2

Retrieved from "https://thedivision.fandom.com/wiki/Weapons_in_Tom_Clancy%27s_The_Division_2?oldid=51436"
Community content is available under CC-BY-SA unless otherwise noted.